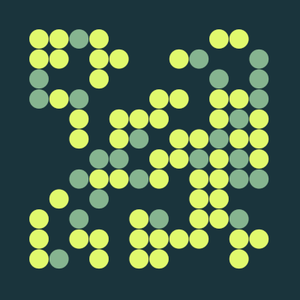 One of the core concepts in D3.js is the data join.

When working with D3, you often start with an array of data objects that you want to join together with DOM elements to build your visualization.

In this post we are starting with a grid of SVG circles.

Find the code for everything here.

Check the sidebar for my original post on creating a grid of elements in D3 - this animation is an extension of that idea.

For each interval in the animation, a random subset of circles from the grid are displayed.

First we will generate the data for all of the circles, and then in each iteration, get a random subset of them to display.

And we've set the circle radius as a constant here, since they will all be the same size.

We will generate an array of 144 data objects to correspond to each circle in the grid, and each will contain the information needed to draw and place the circle in the SVG.

The x and y coordinates of the circles are calculated from x and y scales - check out the original grid post in the sidebar for more on that.

There are three states of the data in a D3 data join, and this animation demonstrates the full cycle of them.

We've defined an update function that handles the data join:

If you refresh the page, the animation will start over and you will notice that all of the circles start out as the light yellow-green.

This is because the visualization starts with all of the data joined to the circles.

After that, we call the update function with random subsets of the circles in an interval loop.

We need to make sure that there is a way to keep track of which data points correspond to which circles throughout the animation, as we cycle through new subsets of circles.

To start off the data join code, we have:

What happens if we don't define a key function?

The animation should work as follows:

If you remove the key function and run the animation, you will notice at some point that the color changes don't quite add up, and one of the previous "rules" has been violated.

Getting a random subset of circles

If you've mainly worked with static visualizations, you might only need to worry about the enter selection, but to create an animation with changing data, you will need to think about the full cycle of enter/update/exit.

Let me know if you have questions or comments by writing them below, or reaching out...